Updated to fix issue with game not resetting initial states, including starting campfire fuel that resulted in insta-death and on winning the game playing again in daylight.

AMAZING graphics for a 48-hour jam.

Tense music and sound made me FEEL cold, and determined, and a little creeped out.

There's a genuine struggle which fits the mood and feel of the game.

You completed a game jam! (That's the most important one)

The eh (There's no bad because it's a game-jam.)

Controls could have been placed on the title screen to inform the player without relying on a website, allowing for standalone distribution.

Initial play feels a bit slow, more variance in speed (starting faster when warm then slowing over a % based on cold) would better inform the player of the affects of their warmth.

Starting the game by having either wood in sight or an automated sequence so there's time to see the cold meter appear and get a general idea of the game loop before moving further in the woods could help introduce the player to the game mechanics without some players fail without ever knowing what's going on.

Multiple times I would gather wood and stop being able to move while my cold meter was only about 3/4 full.  This may have been intended to push the feeling of struggle and despair, however not knowing this it could feel frustrating at times.  A little forgiveness toward the player goes a long way.

Thank you for your feedback. Its appreciated! I'll certainly tweak the walk speeds and cold meter after the jam is over so that it doesn't frustrate players for eternity :D 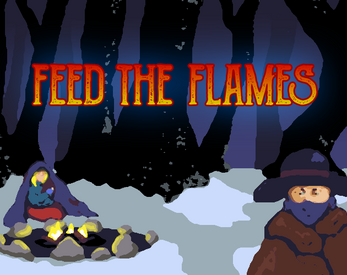